Jen Tyler is “a Highlander living at sea-level now in Cape Town, South Africa. My children are grown up and living la dolce vita elsewhere, but now I finally have time to explore all my creative compulsions. I am happiest when crocheting in a patch of Autumn/Spring Sun in our little garden, a basket of colorful yarn at my feet, the fur-kids snoring close by, and a cup of coffee at hand.” Jen’s designs are exquisite.

This maker's artistry has the following features. To see other makers in this database who offer the same features, click the links below. 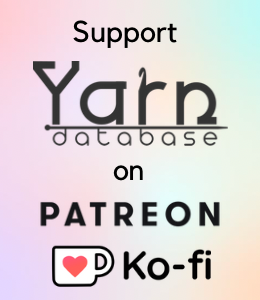 Tania Richter, aka AetherFang, is a double knitting designer with a penchant for the fantastic. She started designing double knitting patterns in college in an attempt to stave off the cold Midwestern winters and now focuses on designing large scarves and shawls featuring dragons, phoenixes, and Celtic designs. Tania is also the author and designer behind Epic Knits, and is the creator of Yarn Quest – Heroes of Yarnia, the first Knitting Role Playing Game. In her spare time she enjoys video games such as Pokemon and Monster Hunter, writing novels, and her second job as a fantasy artist.

Patrons in the Sport Weight tier and up can add their site and a favorite to this space. See the Patrons page for more about supporting Yarn Database through Patreon and Ko-fi.